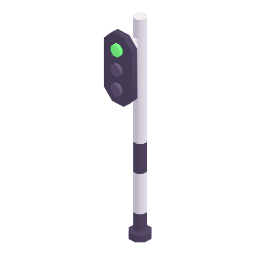 While ordinary signals simply prevent trains from entering occupied blocks, pre-signals act more like relays. They display the same indication as the next block down the track, while also protecting their own. They have three possible indications - red and green, same as a block signal, but also yellow, which is more complex but has powerful implications.\n\nWhen used at junctions, pre-signals can be used to govern multiple paths. They show green when all paths are clear, yellow when one or more are occupied, and red when all are occupied. A train arriving at this signal will not proceed until the specific route it's taking through the junction has a clear block, allowing for even the most complicated track layouts to function safely.

Support me on Patreon!

Did you knew that you can support me on Patreon?
As a freelancer, you can weight into my work more than you can think,
every single donation is time for me to do more awesome work for the community!